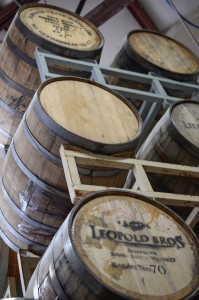 Originally both the location of our taproom and brewery our old taproom now functions as our production and packaging operations. In 2011 our taproom was moved to its current location at 623 N. Denver Ave. just a few doors down from the brewery.

Inspired by this history of ancient and modern beers, Grimm Brothers Brewhouse has dedicated itself to both the resurrection of ancient styles and crafting of modern German and European beer.

Our 10 barrel brewhouse combined with the finest German malt and hops allows our brewers to produce beers full of flavor and variety.  Our barrel aging program uses techniques pioneered by wine masters to create a broad selection of barrel-aged and sour beers.  We select barrels from masters of Bourbon in Kentucky, and wine barrels from France and Colorado’s western slope.

Our beers are packaged on site in both 22oz bombers, kegs, and more recently 12oz can

The brewing history of central Europe has a rich tradition and history dating back thousands of years.  We see in the archaeological record malted grains and brewing from Eberdingen-Hochdorf  2,550-years ago. When the Roman’s invaded the area of modern-day Germany they found an industrial brewing culture that allowed them to export beer back to Rome.  This rich tradition continued up until 1516 and the purity law in Bavaria or Reinheitsgebot.  This new law dictated what beers could be produced and by who.  This would give rise to distinct styles that we see in modern brewing.